Parallels
This page explores the parallels between the various albums. Thanks to Will Plyler of Triple-Knot Studios and Brent Long for their assistance and ideas.
This page is mostly speculation, based on the assumption that these connections are all intentional and not coincidental. Additionally, it is also assumed each album contains interior structures that are unrelated to other albums; these interior structures are not discussed on this page. Only around 2% of this page has actually been confirmed. If you have any suggestions, send me your thoughts via the contact page.
" ...We began discussions about building a 6 album set, the second three...would be loosely associated with the first three, you know, sort of like how in the creation story day one is related to day four, as in, first there is light, then on the fourth day the sun and moon and stars appear. We do these things because we are quite nerdy and also because we hope to inject meaning wherever and whenever we are able. We also like structure, and this seemed a pretty nifty structure to work within, since, well, it is one of the greatest stories ever."--David Crowder, disbandment announcement, 2011 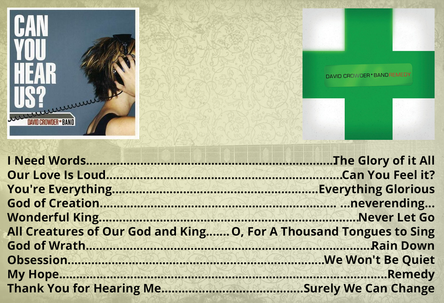 Can You Hear Us? ∥ Remedy
Tracks
CYHU has 10 normal tracks plus one bonus track, while Remedy has 10 tracks total. The bonus track most likely bears no significance in the parallels. Most of the individual tracks line up, as is demonstrated below.

Our Love Is Loud asks God to hear and feel our praise, while Can You Feel It? asks us if we can feel the love and grace of God here with us while we praise. It mirrors the lyric "Can You hear us, can You feel?" with the lyric "Can you feel it?"

All Creatures of Our God and King is a classic hymn telling all of creation to sing praise to God, while O, For A Thousand Tongues to Sing is another classic hymn speaking of the desire to sing infinite praise to God.

God of Wrath worships God as the omnipotent god of everything, while Rain Down asks Him to pour his love down on us.

Obsession asks what one can do with an obsession for God, while We Won't Be Quiet says we'll shout it out to the whole world.

My Hope is about putting our hope in God when hard times come, while Remedy worships Him as the only one who can save us.

Thank You For Hearing Me answers the question posited in the album title by thanking God for hearing our prayer, while Surely We Can Change discusses how we can bring God's remedy to the world. 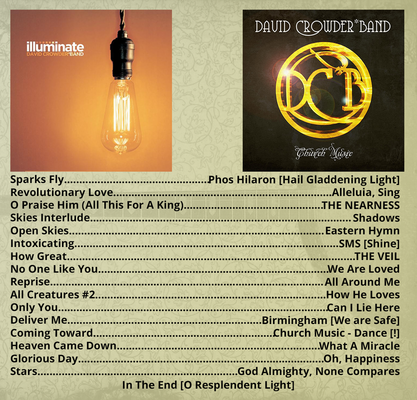 Illuminate ∥ Church Music
Themes
The main theme which is prevalent through both albums is the idea of God shining his light to the world through us, the believers.
​
Tracks
Illuminate has 16 tracks, while Church Music has 17 tracks. There are several parallels to be found between the tracks.

Both albums begin and end with light. Illuminate begins with Sparks Fly, while Church Music begins with Hail Gladdening Light.

​Revolutionary Love is about us being led to a place we never want to leave, while Alleluia, Sing talks about God coming to us. The latter also reflects the former with the final lyric, "to sing of Love, Love, Love..."

Open Skies declares "wherever you are, wherever you've been, He's been there", and Eastern Hymn states that "God is near to each one of us."

​No One Like You, stating that "there is no one like You", is parallel to We Are Loved, asking "can we take in Your light so we can shine like You?"

Deliver Me clearly corresponds to We Are Safe.

Illuminate ends with Stars, while Church Music ends with O Resplendent Light. Both of these songs are about comfort, and the idea that "it'll be alright." 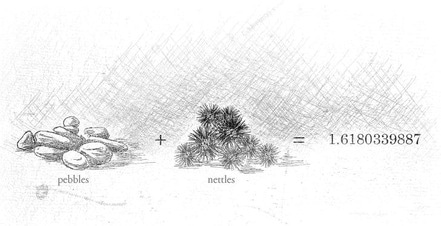 A Collision ∥ Give Us Rest
Themes
Both albums share the common themes of death and resurrection. While A Collision looks at death from the perspective of those left behind, asking questions like "Are we left here on our own?", Give Us Rest explores a bit more of the perspective of the departed, with lines such as "Today is the day I rise like the dawn, up out of death into a Son."

Additionally, both albums explore the idea of a place where divinity and depravity collide. A Collision has the subtitle (3 + 4 = 7), and the back page of the liner notes explains this with "where our depravity meets his divinity, it is a beautiful collision". ​The subtitle of Give Us Rest or (A Requiem Mass in C [The Happiest of All Keys]) references this as well, albeit in a more obscure manner:

The first subtitle is A Requiem Mass in C. This mass of rest for the recently departed is representative of their transcendence of this world to be with God (also referenced in the equations on the album cover), which aligns with the idea of divinity.

The second subtitle, however, The Happiest of All Keys, is a reference to the a scene from 1984 rockumentary This Is Spinal Tap in which a character states that "D minor...is really the saddest of all keys." This film parodies the irreverent and self-indulgent lifestyle of typical rock musicians, and could easily be seen to represent depravity.

Thus, the album's subtitles represent another collision of divinity and depravity. The music of the album contains a similar juxtaposition, with lyrics reflecting the reverence of the requiem mass but music of a more extreme rock style.

Tracks
Any track correlation between these albums has not yet been discovered. It is possible that the disparity in track count is based on the Golden Ratio, which is a symbol of ideal beauty and perfection; 21 multiplied by the golden ratio (1.618033989...) is equal to 34. The golden ratio is used in an equation at the end of the book Everybody Wants to Go to Heaven, But Nobody Wants to Die [see image on right]. It is used in place of the number 7.

​No direct lyrical connections have been noted at this time.
The Digital Age
It is currently unknown exactly how TDA albums are related, and how they are related to DC*B albums. However, there are several indications that Galaxies is intended to be parallel to Church Music in some way, as detailed below.
It's possible that TDA is merely continuing the track set out by DC*B, by making a third set of albums which are parallel to the other two sets of albums. In this case, Evening:Morning would be parallel to Remedy and Can You Hear Us?, while Galaxies would be parallel to Illuminate and Church Music. The syllabic pattern, however, is still unclear. Evening:Morning has 4 syllables, and Galaxies has 3.

Parallels between Galaxies, Church Music, and Illuminate
Again, it is not officially confirmed that these albums are supposed to be parallel. However, there is quite a lot of evidence for the idea, as is demonstrated here.  Tracks
Galaxies and Illuminate both have 16 tracks, and Church Music has 17.
​
Eastern Hymn, the fifth track of Church Music, contains the line "In the space age, nothing is impossible." Crowder has mentioned in a blog post that Church Music references Johannes Kepler and the music of the spheres in some way, and it is possible that this is at least in part the reference that he was referring to. The corresponding track of Galaxies, ...from a great distance..., contains emissions captured by the Kepler Mission, which was actually referenced in the same blog post by Crowder.

All three albums include a track beginning with the word "How", marveling at the wondrousness of God's love for us. Illuminate contains  "How Great Your love for us", Church Music has "How He Loves us", and Galaxies contains "How Sweet It Is that You love me."

Track 8, Kingdom Come, asks the question "If all we did was love like You, what would we see? Your kingdom come". This reflects back to the statement of We Are Loved that "If the whole world could feel it, we could love, 'cause we are loved."

In the album commentary, The Digital Age band members said that the song People of the Cross was written in response to persecution of Christians in the Middle East. The title of the more-or-less corresponding track Birmingham (We Are Safe) is an ironic reference to the 1963 church bombings in Birmingham, Alabama.

Back covers of Neon Steeple and American Prodigal
Crowder
​It has not been confirmed in what way Crowder's solo albums are related, but it is clear that there is at least some correlation between them. Both albums have the same track count on both the regular and deluxe editions, and both albums have similar back covers. The first album has four syllables and the second album's title has seven syllables, and the third album has four syllables again. Perhaps there will again be two series - the first series being a 4-7-4 series, and the second being 3-7-3. Only time will tell.

"When I signed to do the records for my latest contract, I signed for a three record deal. So I started working with a concept and trying to think about how they will all fit together, and how there could be a thread and a progression both to the content and the approach to the music. It may be loose some of the time, but there’s an idea there."--Crowder, Worship Musician Magazine, January 2017 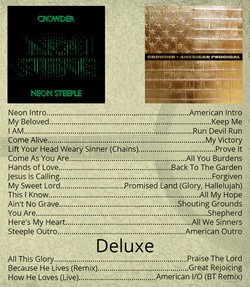 Tracks
The intros begin with a third-person plea to God. Rather than talking directly to God, Crowder speaks impersonally about the nature of his needs from God. Neon Intro says, "Where you are, I don't care, but whoever brought me here is gonna have to take me home." American Intro says "I'm singing and need a choir straight from heaven to sing along."

Prove It talks about freedom and loosing chains. "Chains" is the subtitle of Lift Your Head, Weary Sinner.

Come As You Are and All You Burdens both repeat the theme of the previous song, talking about laying down our burdens at the cross.

Promised Land (Glory, Hallelujah) repeats the refrain "Oh, my sweet Lord"--the title of the song with which it lines up.

The second verse of Shouting Grounds says "No grave gonna hold me down", almost word for word with the chorus of Ain't No Grave.

Both outros close out the album by acknowledging how God has answered the prayer from the intro.
Powered by